In 2019 Ellie Young  and I took part in a residency on The Boat Studio collaborating with filmmaker Roger Graham. He had a strange and wonderful idea to make a documentary/absurdist film about our time on board. The film beautifully explains the project and depicts mine and Ellies friendship in a really captivating way. It lures you in to a mysterious and surreal 24 hours on our boat. I’m so pleased to share it with you…

You can watch the trailer here… 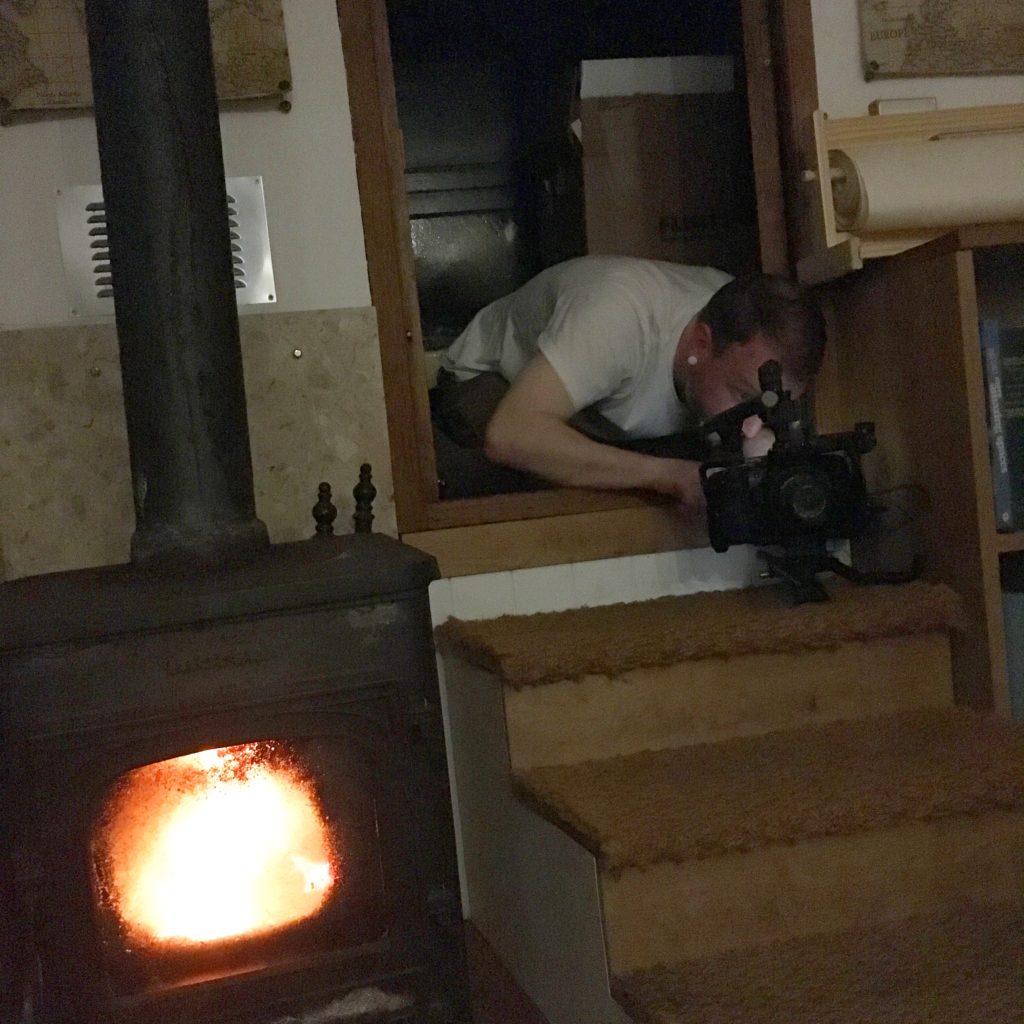 Alice Briggs was the selected artist from Wales to do the return journey from Llangollen to Chester. Alice’s recent work has involved working with residents in care homes exploring the meanings and memories associated with their personal belongings. Alice is particularly interested in lost objects and was keen to dredge sections of the canal to discover the items that had been lost to the murky depths. Using a strong magnet we were able to pull up many recognisable and some more elusive objects. By placing these objects within a light box and photographing them each object was re-examined and their individual story re-imagined. The week saw the seasons turn from Summer to Autumn. This meant long intense days driving as we tried to avoid the storms rolling in. Our week was punctuated with trips to meet with James Harper curator at Ty Pawb in Wrexham and with Steffan Jones Hughes, director of Oriel Davies, who came to visit the boat. Our Open Boat at Telfords Warehouse was really well attended and coincided with their Rock for Europe, anti Brexit event which made for a politically charged and receptive crowd.

Manchester based artist Elizabeth Wewiora was the successful candidate chosen from the North West of England to take part in the first part of Border Bound journeying from Chester to Llangollen. Liz bought with her cyanotype liquid and a variety of fabrics. All of us experimented with different boat paraphernalia and flora taken from hedgerows along the towpath. Throughout the week Liz became interested in the casting on and casting off of the ropes over bollards and the similarity to her knitting practice. She extended the middle rope using a three woven knitted lengths of wool. The week included a trip to Ty Pawb, Wrecsam and saw Steffan from Oriel Davies visit and travel with us over the famous Pontcysyllte Aqueduct. The Open Boat at Llangollen Tea rooms saw over 40 people on board and we happy to contribute the atmosphere of the bustling tea rooms and horse stables in this beautiful part of the country.

Over the winter 2017 – 2018 we invited an eclectic mix of artists and musicians to take part in a series of residencies on our boat. This was used as a research and development before applying for funding to develop our residency programme. It was also a way for Ellie and I to say thank you to the ever supportive Cardiff art scene and an opportunity to collaborate with artists we have wanted to work with for some time. With Holly Davey the boat became a cinema and the content of a film by Nick Cave became the starting point for a two day long conversation. With Gareth Bonello, Eugene Capper, Ida Wenoe and Lydia Hol the boat became a place of musical collaboration. This resulted in a beautiful evening of music back in Cardiff. Johana Hartwig and Freya Dooleys residencies were both playful. We tied pens to different parts of the boat, identified canal fauna, discussed data capsuling and made upside down films of studio activity. With Freya we partook in some absurd writing exercises, drew each other, made boat sounds with our voices and read an entire book out loud. It was a complete pleasure to facilitate and participate in these little interludes of creativity.

We were delighted to host the Future Farmers on our boat last Autumn. The Future Farmers were en-route to the National Museum Cardiff for the Artes Mundi Prize where, with Amy Francescini, they exhibited alongside six other artists who directly engage with everyday life through their practice and who explore contemporary social issues across the globe. The aim of their trip was to transport Welsh Hen Gymro grain back to its homeland and continue and complete their journey on water.

Due to engine problems we could not get the artists all the way to Bristol. We still had an incredible week on the River Thames and the Kennet and Avon Canal. The Future Farmers were particularly interested on the numerous water mills found on the towpath. We also used the boat as a pirate radio station to transmit Radio Ramona.

Esme Bamber and Rachel Sycamore were chosen to be our first ever artists in residence on The Boat Studio. With much hilarity and sometimes calamity we navigated the Droitwich/Worcester loop twice over four days. It was a wonderful moment for us to see the studio being used in the way we envisaged. Both artists responded in different ways and our first ever ‘Open Boat’ on the banks of the River Severn was an excellent end to the whole experience.

For more work and to see Jess Mathews full Venice project click here: www.veniceencounters.tumblr.com and contact her at [email protected]

Artist Sian Green presents images of litter that she picked up during a walk in Venice. She walked in a large unplanned and meandering loop from Castello to the far end of Cannaregio and back again, occasionally referring to a map to avoid returning home too early. She picked up objects which held a particular interest for her through their colour, form, materiality or gesture, and photographed these objects after returning home. They are presented in the order they were collected. The objects can be loosely grouped into 3 categories: Venice’s tourism trade; domestic life; and shipping.

Thank you so much for your interest!